A Joint Committee of AIKSCC & political parties will fine-tune the Bills: Demand emerges strongly for Special Session of Parliament on Agrarian Crisis

New Delhi, March 28th 2018: Senior political leaders cutting across party lines extended their solidarity to All India Kisan Sangharsh Coordination Committee (AIKSCC) in a Round Table organised today in Constitution Club in the National Capital by the largest joint platform of farmers’ movements. Leaders of many political parties participated in the event, and lent strong and clear support to the effort of AIKSCC in creating legal entitlements for farmers on issues of indebtedness and lack of remunerative prices. It was resolved that a Joint Committee of representatives of AIKSCC and political parties will be constituted to fine-tune the Bills, and that all-out efforts will be made to pass the Bills at least in the Upper House. 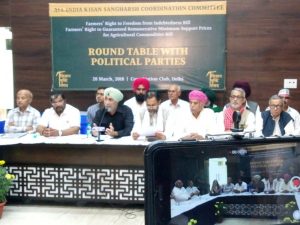 AIKSCC, after nation wide consultations had finalised two Bills to confer legal entitlements on all farmers: “The Freedom from Indebtedness Bill 2018” and “The Farmers’ Right to Guaranteed Remunerative Minimum Support Prices for Agricultural Commodities Bill 2018”.

Dinesh Trivedi of AITC recommended that we should demand for a Special Session of the Parliament to find a solution to agrarian crisis in the country. This suggestion found favour with all the participants including AIKSCC members and it was decided to raise this demand in a unified manner.

Leaders cutting across political parties bemoaned the fact that the current government, instead of doing something positive for farmers, is actually worsening the situation in numerous ways. Parties agreed that debt relief for farmers is acutely needed, and that the nation owes it to them. The fact that the National Commission for Farmers’ recommendations on price formula have not been implemented for more than a decade meant that debts of farmers have built up, and just on that count, farmers’ loans have to be waived immediately, they said.

All parties expressed deep appreciation for the effort of AIKSCC in formulating legal entitlements for farmers, which is a unique and first-time effort in the country. It was resolved that tabling of the Bills and debating the same in the Parliament would send a clear message to farmers in the country that there is a united struggle being mounted in a stronger fashion, to secure basic rights for them. This will go a long way in preventing farmers from committing suicides, it was opined.

On behalf of AIKSCC, VM Singh, Convenor, thanked all the parties for supporting the Bills and expressed confidence that the farmers’ movements will be strengthened by such support.