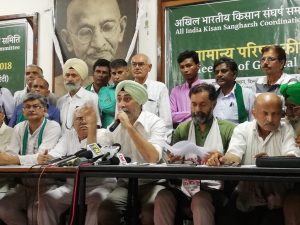 AIKSCC forcefully condemned the announcements made by NDA govt on MSP as betrayal of the promises made to the farmers. The MSP figures being claimed as implementation of Swaminathan Commission recommendations is blatant fraud on the farmers of the country.

To meet the false propaganda by the Prime Minister who has decided to hold 40 meetings to highlight the ‘historic’ raise in MSP, AIKSCC will hold 400 meetings in the country in the next 4 months to expose this fraud on the people of the country.

AIKSCC resolves to hold token black flag demonstration on July 20, 2018 with a march from Mandi House to Parliament Street at 11 am against the fraud perpetuated by the Prime Minister in the name of MSP.

The gathering will also request the parliament including the 21 parties that lent support to the farmers bills to pass the same in the parliament. Both these bills – the Debt Waiver and Guaranteed MSP Bills are scheduled to be presented in the Lok Sabha on 20th July as private member bills. The protest will emphasis the “Dhokha” given by the govt. to the farmers.

Modi govt’s MSP for Kharif is based on the same formula of A2 + Fl that was given by the Manmohan Singh govt for Rabi. This is entirely different from the demand of C2 costs + 50% which was also promised by the Prime Minister.

Govt has restricted announcement to only 14 crops while farmers have been demanding MSP for all crops including fruits and vegetables and Milk amongst other farm related produce.

Most significant is the lack of any plan to ensure procurement of the crops for which MSP has been announced. Only 28 - 30% of Wheat and 30 to 35% of paddy is procured while for coarse grains the procurement is less than 1%. In pulses, even the increased procurement in the last year has only reached 18%, while in oilseeds it is only 6.4%. With PDS being converted to DBT, there is widespread apprehension that even the current procurement will stop. AIKSCC demands that as per their MSP Guarantee Bill to be placed in the parliament on the 20th, every grain in the country must be sold at least on the MSP and failure to purchase the same by the traders would invite penal action.

AIKSCC empahises that the cost of inputs like diesel, fertilizers and electricity are being increased rapidly, particularly diesel on daily basis. The MNCs are sellng seeds and other inputs at very high rates. AIKSCC has been demanding reduction in input costs, which is also part of the MSP bills. It demands immediate reduction of diesel, fertilizer and electricity costs and input subsidy to all farmers, share croppers, tenant farmers in order to support farmers and keep food prices in check.

Govt had claimed in this year’s budget that it will pay a Bhavantar for the crops for which a mechanism was to be announced. This has been a total failure in Madhya Pradesh where the traders have taken full advantage and reduced the prices under the garb of the govt. paying the difference. The fall out is that the farmer has got less money than what he got last year and no difference has been paid to farmers who have not registered themselves.

AIKSCC will carry out MSP Adhikar Andolan during Kharif marketing season to expose govt.’s claim on MSP and to ensure procurement from Oct 8 to 10 throughout the country.

AIKSCC shall also organize a two days “Kisan Mukti Kooch” on November 30 and December 1 to force passage of the two bills along with other farmers’ issues.

AIKSCC is also demanding a special session of parliament to discuss and pass these two bills.

AIKSCC National Council appealed to all 21 political parties to extend support to the two bills in parliament. A letter to seek support of Members of Parliament, an appeal is being sent to all Lok Sabha and Rajya Sabha MPs.